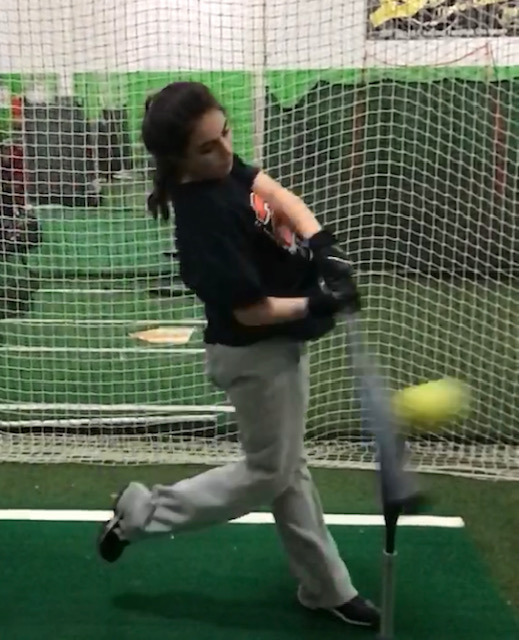 This isn’t actually the topic I’d planned on writing about today, but an email hit my mailbox this morning that I thought was worth sharing. Especially since many of us have moved inside for the winter.

The author was Mike Ryan of Fastball USA, a facility and program located within fairly easy driving distance of my house. I don’t really know Mike, but I definitely know his brother Pat (shout out, dude) who used to coach for their softball program and has raised some pretty darned good fastpitch ballplayers himself.

Anyway, Mike’s email was talking about how deceiving a batting cage can be when judging the success of hits. Here’s an excerpt from the email:

Most balls hit on a line drive in a cage are actually ground balls.

You need to aware of this, otherwise you will look like a powerful

hitter in the cage, and go outside and be a ground ball machine.

For example, in our batting cage at Fastball USA we figured out when the L screen is 35 feet away, a ball that hits the top of the screen is roughly at a 8-10 degree launch angle. 10 degrees if it makes it over.

Most hits in MLB happen between a 10-30 degree launch angle.

So common sense tells us, any ball flight below the top of the L screen produces a ground ball in a game.

We also figured out that if a player hit a ball to the top of the net directly over our L screen it was roughly a 20 degree launch angle.

I’m so glad to hear someone else say this. Fastpitch softball still seems to labor under some old beliefs about hitting, including the idea that a batted ball that hits the top of the cage instead of the back is bad.

In fact, I know players who have been dinged/yelled at/cajoled or whatever because their hits were going to the top of the cage toward the back. While I appreciate Mike doing the math to confirm it (evidence is always good) I don’t think you have to be a geometry expert to figure out that a hard-hit ball that hits the top of the net at around 40-50 feet is pretty likely to travel the distance needed to make it close to or over a fence 200 to 220 feet away from home. Or even less if you’re on a shorter field.

Balls going over the fence are good things because, well, they’re really hard to defend.  And they produce runs – as many as 4 with one hit.

Which means that if you’re rewarding hitters for hitting the back of the net (even if it’s low) and punishing them for hitting the top, you’re not making your team better. You’re actually killing your ability to score runs and win games.

Ok, that’s the long ones. But what about the balls that are only up to or even a little in front of that screen set at 35 feet?

Surely those must result in can of corn fly balls? Here’s what Mike had to say about that (and I know, don’t call you Shirley):

If the ball hits the top of the net about 5 feet in front of the screen you’re on about a 30 degree launch angle.

Remember that most MLB hits top out at 30 degrees, so you’re still in great shape. He then goes on to say that the lowest you want to hit the ball is the top of the L screen, and the highest is about 5 feet in front.

Of course, if you have your screen set closer to simulate faster pitching (as I usually do) that visual will change. But if you mark off roughly where 30 feet is in the cage you’ll have a pretty good idea of whether that contact was going to be an extra-base hit or an easy out.

So there you go. If you have a girl consistently hitting the top of the net 30-50 out, don’t punish her. Encourage her. She could wind up being a big bat for you next season.

By the way, if you want to see more from Mike, he posts at the Baseball Education Center. This particular article isn’t up there yet but I imagine it will be at some point.

I got on his mailing list through Paul Reddick Baseball, so I imagine if you sign up for Paul’s emails you’ll start getting Mike’s too. (I didn’t see any direct way to sign up with Mike; maybe Mike can comment on how to get more info from him directly.)

Mike’s stuff is oriented toward baseball and boys, but as we all know a swing is a swing so lots of value there for the parents and coaches of fastpitch softball players.