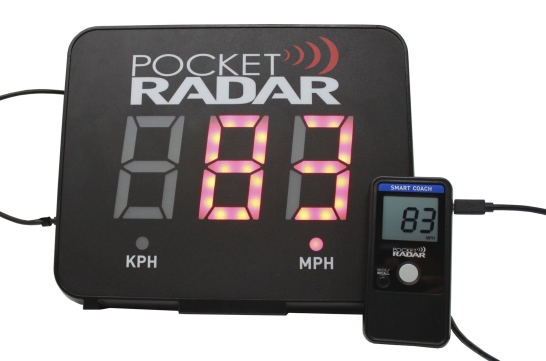 Pocket Radar devices have become pretty commonplace in the fastpitch softball world. You see them everywhere, at the ball park, in practice facilities, and in social media photos as grinning pitchers proudly display their latest speed achievements.

The handy devices are not only easy to carry around (and not as obtrusive to use as a standard radar gun since they can easily be mistaken for a mobile phone) but priced within reach of most programs, coaches and bucket parents.

The current top of the line is the Pocket Radar Smart Coach, which I reviewed back in 2018 when it first came out. One of the major benefits is that the free app that comes with it lets you set up your Smart Coach to capture each pitch (in Continuous mode) and then display the results on a phone or tablet via Bluetooth so the pitcher can get instant, accurate feedback on each pitch so she can measure her progress.

That works great indoors. But it might be a little dicier out on an actual field. The bright sunlight on a super hot day might make the display on an iPad or other tablet tough to read, and it could cause the tablet to overheat and shut down.

There is a solution, however: the Pocket Radar Smart Display. It delivers a large, very bright speed readout of up to three digits that the manufacturer says can be read from 100 feet away in bright sunlight. It looks very similar to the types of displays used on scoreboards.

I’ve been using one for about a month and so far it has been great. I haven’t had a chance to try it outdoors yet, but based on what I’ve seen indoors I expect it to be plenty readable once the weather breaks and we can move outside again.

The Smart Display is made of durable plastic, and its compact size (roughly 10.5 inches W x 9 inches H x 2.5 inches deep) is easy to carry, transport and store. In addition to the digital display, the front side has indicator lights showing whether speed is being measured in miles or kilometers per hour (user selectable).

There is a combination carry and mounting handle/kick back stand that locks in place to create a 45 degree tilt as well as sitting straight above the unit or folding out of the way underneath. 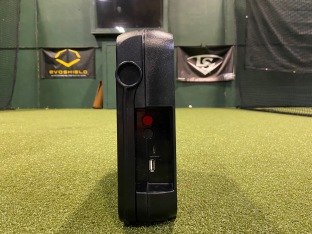 The left side recess includes (from top) a power button, a functions button, the power connection socket and a USB socket to connect the Smart Display to the Smart Coach.

The function button offers two menus – a basic and advanced – giving you more control over the Smart Display. For example, if you tap the black button once you can bring up the last recorded speed so you can capture a photo of it. The Smart Display stores the last 25 speeds recorded so you can wait a few pitches to see if the pitcher can go even higher (more on that later). 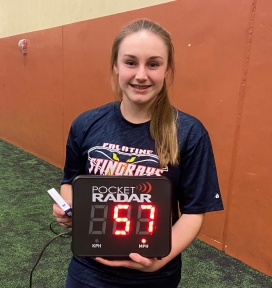 This was her second new high of the night.

Holding the black button down for two seconds lets you check the life of the batteries if you are using alkaline C-cell batteries.

The advanced menu gives you even more options, such as setting the Smart Display to measure miles or kilometers per hour, setting the auto-off timer, adjusting the brightness and more. To access it you simply hold the red (power) and black (function) button in at the same time for more than two seconds.

Set-up instructions, and instructions on how to access the menus, are printed on the back of the unit for extra convenience. Good news for those who don’t want to carry the instruction manual with them.

(Incidentally, while I primarily use the Smart Coach and Smart Display to measure pitch speeds, you can also set it up to measure ball exit speed off the tee for hitters. So if you’re a team coach wondering if it’s worth it for two or three pitchers, that is something else to keep in mind when determining the value.)

The USB side connects to the Smart Display, and then you plug in the power source, which powers both the Smart Display and the Smart Coach. For power, you can either use a power block (the type you use to power a mobile phone or tablet when the battery is running low) or use the supplied cable and plug to plug directly into an AC power source.

You can also insert four C-cell batteries into the Smart Display but I don’t recommend that if you plan to use the radar to capture every pitch. You’ll end up spending a fortune on batteries if they’re not rechargeable. If you need portable power, use a power block – you can get several hours of performance out of it depending on the unit you use.

Once you have all the connections you have a couple of additional options. If you are outdoors and have the Smart Coach set up safely on a tripod behind a backstop, you can also mount the Smart Display to the fence using the two supplied carabiner clips, or hang it below the tripod.

If you can’t mount the Smart Display to or behind a protective backstop – for example, when you are indoors in a net batting cage – you can use an extension USB cable to run the display out to the side and set it on the ground where it is unlikely to take a direct hit. The built-in kick-back handle lets you tilt it up for easier reading as well as greater stability. Fortunately, Pocket Radar offers a 50 foot cable as a separately purchased accessory if you need it.

That’s actually what I have been using indoors and so far it has worked very well. It seems to be durable enough to handle the constant rolling and unrolling required if you have to set it up and take it down every day as I do.

It’s not quite as convenient as the Bluetooth connection with a mobile phone or tablet, but you also don’t have to worry about interference. It also frees your phone or tablet for other duties, such as taking video, measuring spin rates with a Bluetooth-enabled ball and app or playing music.

That said, I’m told the good folks at Pocket Radar are looking into the possibility of making it Bluetooth-enabled in the future. If it comes true, hopefully they will offer either a retrofit kit or a buyback option as they have with other products.

Each time the pitcher throws a pitch, the speed is shown on the digital display in big, bright red numbers. The numbers remain visible for a few seconds, then turn off. At that point you’re ready to capture the next pitch.

One of the best features of the Smart Display is that if the pitcher hits a new speed high, you can use the recall function to bring that number back so you can take a photo as I did here. While showing the numbers on the Smart Coach itself is nice, there’s nothing like showing them in big, bright numbers to give the pitcher an extra sense of pride.

The display will hold for about a minute, I think, which should be ample time to get the photo. But if not, just go back and pull it up again.

Having this instant, continuous feedback, by the way, has had a positive effect on my students as I wrote in another blog post. Seeing where they are tends to make them push themselves to achieve higher speeds. Having the numbers in a big, bright display that anyone in the area can see adds a bit of accountability too. No one wants to be seen as slacking off or underachieving when others are watching.

Watch the (outside) nickle hardware

I will admit I was a bit concerned when I was first using the Smart Display because it seemed like it was prone to lose power and shut down any time I had a student pick it up to take a photo. What I discovered, however, that it wasn’t the Smart Display that was the problem.

It was actually the power connection cable from my power block to the unit. It apparently was cheap, and after not much use broke somewhere in the middle. If I set it just right it would work, but if I moved it even slightly it didn’t.

Once I started using a new cable the problem went away. I share that story so you don’t freak out if you have a similar issue. Check the nickle hardware first, especially the power block and cable you probably picked up for free at a trade show or as a gift for attending a presentation. You’ll save yourself a lot of embarrassment.

By now you’re probably wondering what all of this wonderfulness costs. It’s not cheap. The Smart Display retails for $499.99 on the Pocket Radar website, and a quick search showed that price holding across the Internet so it’s definitely not for the casual user.

(There was one exception, which showed the Pro Radar System and Smart Display for $69.99 but you probably want to steer clear of that. If it sounds too good to be true it probably is.)

As you can probably tell, I really like the Pocket Radar Smart Display. I can keep it and all the accessories in my car, which means I don’t have to remember to charge and bring my iPad to every lesson – an issue I had a couple of times, which was disappointing for both myself and my students.

I also don’t have the risk of my iPad falling out of bag or “walking away” in a crowded facility if someone sees me tucking it away after lessons. It’s also a less attractive target to be stolen since it basically has one function and you need a Smart Coach to operate it.

More importantly, the bright display and the mounting options will be a definite plus when I am giving lessons outside. I wasn’t relishing the idea of setting my iPad down in the dirt. Now I won’t have to.

The one big thing you give up is the ability to store the results permanently in the app so you can review the history. But you can always chart those separately so for me the trade-off is worth it. Especially since I will usually have several lessons at a time so the history all runs together anyway.

You also can’t use the app to record video with speed embedded – I tried but my phone couldn’t find the Smart Coach on Bluetooth. So if you’re looking to do that you’ll need to disconnect the Smart Display. Not a big deal if you plan ahead.

For facilities, pitching coaches, programs with multiple teams or even team coaches who are serious about measuring performance and holding players accountable, the Smart Display is a great addition to the Smart Coach. It’s also a smart investment in your players’ futures.